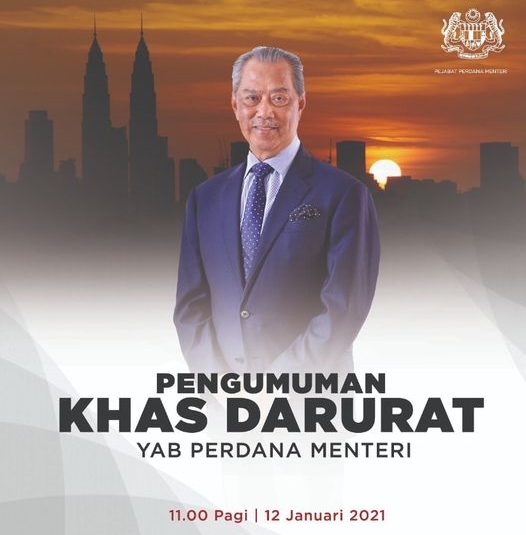 The statement also states that under the state of emergency, an independent committee will be formed.

"Inter-district traveling in the movement-control order (MCO) states will also be prohibited", said the prime minister in his speech which was broadcast live to the country at 6pm today.

Mr. Muhyiddin also said no curfews will be imposed during this period and he pledged not to interfere in the judiciary.

He insisted he was committed to holding a general election once the country's outbreak is brought under control. The United Malays National Organization, the coalition's largest party, has threatened to withdraw support from the prime minister.

Under the stricter restrictions, all social events involved mass gathering are banned, residents only allowed to travel within a radius of 10 kilometers, and no dine-in for restaurants.

Essential businesses - such as supermarkets and banks - can continue operating, as can five key economic sectors including manufacturing and construction, Muhyiddin said.

Some lawmakers in the ruling coalition have pulled support for the premier and have called for early elections, while opposition leader Anwar Ibrahim said previous year that he had a majority to form a new government.

Oh Ei Sun, a senior fellow at the Singapore Institute of International Affairs, said most people could understand the need for movement curbs but an emergency declaration appeared overblown as it is unclear how that could help slow the virus spread.

Marina Mahathir, an activist and the daughter of former prime minister Mahathir Mohamad, tweeted that an emergency declaration was a "declaration of failure".

France to send first 50,000 doses of Moderna vaccine to hard-hit regions
The Biotech firm added on its slides that 32.9 million doses had been shipped as per Sunday. The promise for a production boost comes as U.S.

BC health officials report 1,475 new COVID-19 cases since Friday
Pierce County now has a total of 28,583 confirmed cases and 334 deaths. More than 50,500 people have recovered from the virus in B.C.