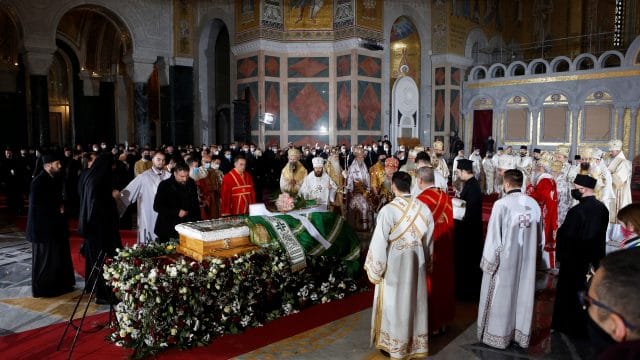 "For 10 years, as Patriarch, he led us quietly, wisely and patiently towards the kingdom of heaven", Hrizostom said, and added: "Despite all the temptations and troubles that the church went through, it remained the unshakable pillar".

Serbs lined the streets of Belgrade to pay homage to the late Serbian Orthodox Patriarch Irinej for his funeral on Sunday, despite the spike in COVID-19 infections across the country.

"An era has ended", Vucic said in his funeral address.

The passing of the Patriarch comes as only last month Metropolitan Amfilohije, the senior Serbian Orthodox Church bishop in Montenegro, died at the age of 82 at the Clinical Centre of Montenegro in the capital Podgorica due to complications with pneumonia and COVID-19.

Irinej tested positive for the coronavirus and was admitted to hospital in Belgrade on November 4.

Since Amfilohije's death, and the hospitalization of the patriarch, Serbian priests have started to appeal for their parishioners to take the deadly virus seriously. They had previously downplayed the threat from the global pandemic and largely ignored bans on large gatherings and preventive measures during prayers and other church services.

Serbian President Alexsandar Vucic (right) shared a photo of himself and Irinej on Instagram, paying tribute to the religious leader, saying "It was an honour to have known you". "People like you are never gone".

He served as the Bishop of Niš from 1975 until January 2010 when he was elected as the 45th Patriarch of the Serbian Orthodox Church after the death of Patriarch Pavle.

Its government tightened the restrictions, but the authorities declined to impose restrictions on the church, which has about 12 million followers, majority in Serbia, Montenegro and Bosnia.

The Serbian church is one of a group of autocephalous, or independent, churches that make up the Orthodox Christian faith.

Irinej adamantly opposed the independence of Kosovo, Serbia's former predominantly Albanian southern province, considered a medieval cradle of Serbian Orthodox Christianity and where some of church's most important monasteries are based.

Irinej, however, was among the rare Serbian church dignitaries who openly called for improved ties with the Roman Catholic Church.

The Orthodox Churches split from the Vatican and the Roman Catholic Church in the 11th century in an event called the Great Schism.