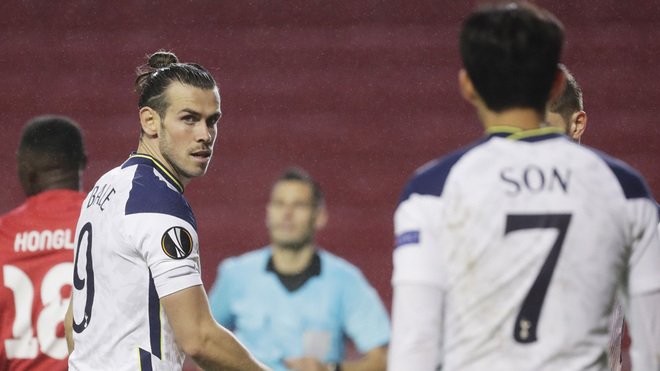 Jose Mourinho has freshen up his squad with Serge Aurier recalled to start at right-back meaning Matt Doherty drops out while Sergio Reguilon returns at left-back.

Jose Mourinho's social media following is continuing to grow after a series of brilliant Instagram posts and he had football supporters laughing once again with his hilarious reaction to Tottenham's Europa League defeat to Royal Antwerp on Thursday night.

Giovani Lo Celso, Dele Alli, Steven Bergwijn and Carlos Vinicius were all hooked at the break, but Spurs don't agree with one change there.

Mourinho confirmed Bale would start the Group J match and was confident the Wales worldwide was ready to deliver.

Mourinho clearly wasn't happy with what he saw in the first half, as he made four half-time substitutions in an effort to change the game - and it didn't work.

The Welshman and his fellow incomers had plenty of the ball in the final third, but tried to be too intricate with their final pass. "I don't want to take credit from them".

Ben Davies was at fault as he was caught in possession by Dieumerci Mbokani and he raced away, teeing up Refaelov to fire home in clinical fashion.

It's just the latest in a string of incredible Instagram activity from Mourinho.

Antwerp were given endless opportunities to exploit open space by Spurs and the pressing from the visitors was fairly non-existent.

Spurs never threatened an equaliser, despite some late territorial, and continue a quirky record of never having won in Belgium.

Walmart Expands Black Friday Into 3 Events in November
A lot of people have been wondering how Walmart will continue their Black Friday sales this year with the pandemic going on. This time, items that will be marked down will include TVs, computers, tablets, movies, music and more.

Justice Dept. charges 8 in Chinese harassment plot in US
Three of the defendants - Zhu Yong, Hongru Jin, and Michael McMahon - were arrested on Wednesday in NY and New Jersey. Court records showed that the alleged plot was known as " Operation Fox Hunt " and "Operation Skynet".