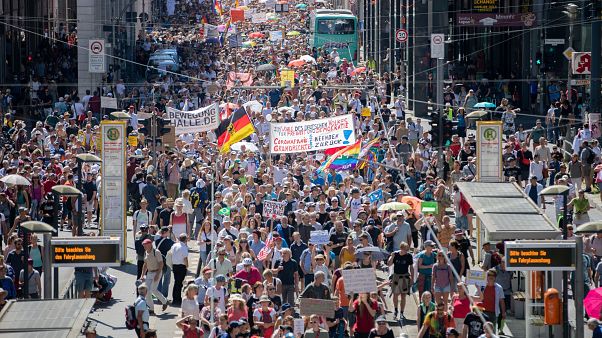 A crowd of people whistling and cheering, and with few masks in sight, marched from the Brandenburg Gate on Saturday ahead of a rally on a wide boulevard that runs through the city's Tiergarten park. Police monitoring the event used bullhorns to urge attendees to wear face coverings and abide by social distancing guidelines.

Many protesters also yelled at people, who were watching the demonstration, calling on them to take off their face and nose protection.

Despite Germany's comparatively low toll, authorities are concerned at a rise in infections over recent weeks.

People voiced opposition to protective measures with whistles and chants like "freedom" or "resistance". They tweeted that they drew up a criminal complaint against the rally's organizer for failing to enforce hygiene rules, then said shortly afterward that the organizer had ended the march.

The protest, declared as "Day of Freedom", was supported by some neo-Nazi groups and conspiracy theorists, along with Germans who say they are fed up with the government's restrictions to curb the pandemic. The demonstrators were kept apart from counterprotesters, some chanting "Nazis out!" Some of the mask-clad counter-protesters held signs accusing their political opponents of harboring fascist and anti-Semitic views.

The demonstration came as German officials fear a second wave of the pandemic, which has so far killed 9,154 people in the country amid 210,000 confirmed coronavirus cases.

The country has been easing lockdown measures since late April but social-distancing rules remain in place, as does a requirement to wear masks in public transport and shops.

The rally, which was organised by several groups, including Stuttgart-based "Querdenken 711", comes amid a spike in the number of COVID-19 cases in Germany.

Saskia Esken, co-leader of the ruling Social Democratic Party, wrote on Twitter that "Thousands of #Covidiots are creating a second wave in Berlin, without distancing or masks".