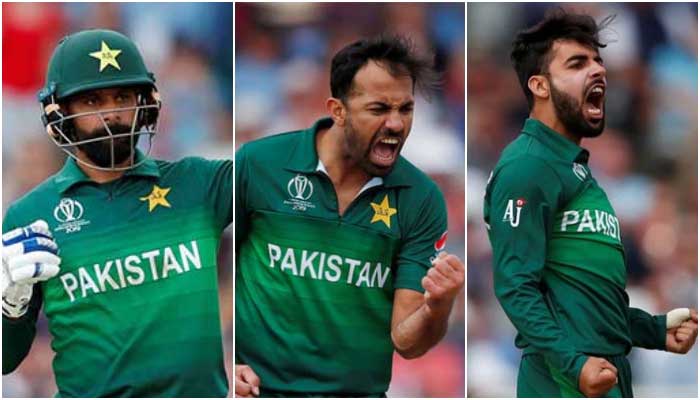 Mohammad Hafeez, Mohammad Rizwan, Shadab Khan, Wahab Riaz, Fakhar Zaman and Mohammad Hasnain will fly off and join the Pakistan cricket team in England after they tested negative for the coronavirus a second time. They will not be allowed to travel to England until they have recorded two consecutive negative tests. "All the six players were re-tested on Monday, following their first negative test on June 26", the PCB confirmed.

With as many as 10 players testing positive for Coronavirus from the initial round of tests, the board, eager to ensure a conduct of the series, named a reworked 20-man squad with the likes of fast bowler Musa Khan and keeper-bat Rohail Nazir flying out to the United Kingdom in the first batch on June 28.

A depleted Pakistan squad arrived in England on Sunday to play three Tests and as many T20Is. They can join the squad in England only if they return two negative tests.

The first batch of touring Pakistan players underwent coronavirus testing on their arrival in Manchester on Sunday before moving to Worcestershire's Blackfinch New Road for a 14-day isolation period.

The tourists will then move to Derbyshire's Incora County Ground on July 13 to begin internal warm-up matches.

Jennifer Hudson Channels Aretha Franklin in Stunning New Photos from Respect
Hudson, who has described playing Franklin as her "dream" role, received the megastar's approval before filming began. It was originally set to release this August but was pushed because of the coronavirus pandemic.

Iran Sentences Former Journalist to Death For Fuelling Anti-Govt Unrest
Authorities released Mr Marchal in March in an apparent prisoner swap for Iranian Jalal Ruhollahnejad, who was held in France. Zam is the son of Shiite cleric Mohammad Ali Zam, a reformist who served in a government policy position in the early 1980s.