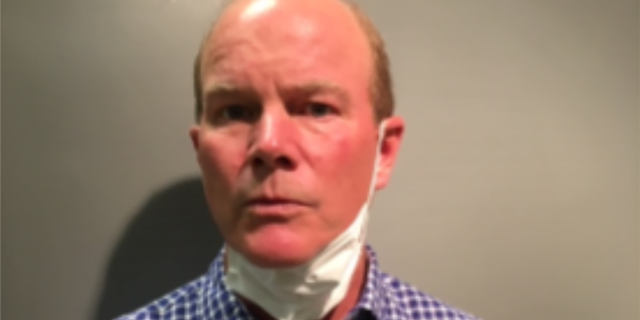 After forcefully retrieving the paper from the child's hand, the cyclist then grabs his bike and charges at the young man recording the encounter. "A subsequent arrest warrant was obtained and served on Mr. Brennan this evening after he voluntarily turned himself into detectives", police said in a statement.

The Maryland-National Capital Park Police tweeted that the assault occurred on Monday on the Capital Crescent Trail.

Brennan is accused of attacking three teenagers in all: the man who was videotaping, the woman who was posting fliers and the other woman who shouted at him.

The male victim, who recorded the video and asked to remain anonymous, told Patch.com: "He was just cycling down the trail".

"He videoed us on his first pass by, then stopped about (15 metres) past us and asked to see my signs, in a friendly tone".

"I wanted to inspire people to take action and show them what they can do", the 18-year-old said. "As soon as I put out my hand to show him the poster, he aggressively ripped it out of my hand". Park Police have a strong suspect as a result.

He said he and his friends were headed toward Georgetown when the cyclist, also headed in that direction, passed them while holding his cellphone.

According to the teen, they were posting flyers around affluent neighborhoods to bring awareness to the recent killing of George Floyd in Minneapolis, Minnesota, and other racial inequalities in the US. "But please don't name individuals and risk harm to innocent people", he said.

Lili Reinhart separate of Cole Sprouse ? She made her coming out bisexual
In the wake of the violent death of George Floyd , Lili Reinhart has been very vocal about her stand against racial injustice. We are taught to look at our police officers as helpful and friendly when we learn about " leaders " in elementary school.

Samantha Ware made accusations on Lea Michele on his tweet #BlackLivesMatter
Perhaps really apologize as a substitute of putting the blame on how others "understand" you. I think Rachel - erm, I mean Lea - didn't like sharing the spotlight".