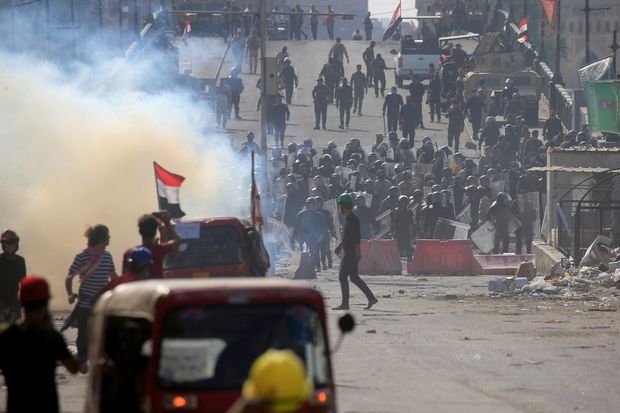 Numerous demonstrators, some of whom view Sistani as part of the political and religious system they say is the cause of many Iraqis' misery, took little solace from the cleric's words. According to the United Nations Assistance Mission for Iraq (UNAMI), 97 people were killed between October 25 and November 4, while the Iraqi High Commission for Human Rights (IHCHR) has said that 105 people have been killed, the vast majority of whom have been protesters.

Six were killed and at least 41 injured.

Handouts for the poor, promises to try corrupt officials and creation of more job opportunities for graduates have failed to placate protesters, whose demands include a new electoral system and the removal of all current political leaders.

At least 270 people have been killed and thousands injured in the anti-government demonstrations throughout Iraq since October 1, according to Iraqi sources. They spoke on condition of anonymity in line with regulations.

The protest movement has deemed the Iraqi political system corrupt and is calling for dramatic reforms to the political system along with the resignation of Prime Minister Adel Abdul-Mahdi and his entire government.

HRW also urged Iraq's worldwide partners, including the US, European countries, and Iran, to end assistance to units involved in violations against protesters and publicly condemn the actions of the security forces.

The commission called on security forces to take more humane means in dealing with protesters. "It is no longer permissible to procrastinate on this issue because of the great risks facing the country".

The protests pose the biggest challenge to the government since it declared victory over militants from ISIS almost two years ago.

The protesters have focused their anger on Shia political parties and militias, many of which have close ties to Iran.

The report gave no further details about Friday's controlled detonation under Sinak bridge over the Tigris River that cuts through Baghdad.

"The biggest responsibility is on the security forces", a representative of Grand Ayatollah Ali al-Sistani said in a sermon after Friday prayer in the Shi'ite Muslim holy city of Kerbala.