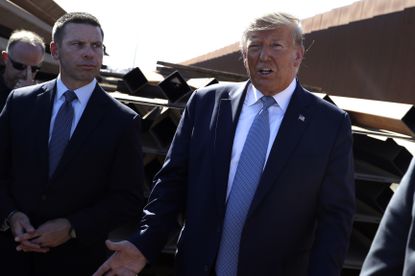 The acting head of US Homeland Security, Kevin McAleenan, has resigned after six months in the post.

President Trump said he would announce McAleenan's replacement next week.

"Kevin now, after many years in Government, wants to spend more time with his family and go to the private sector", Trump tweeted shortly before taking the stage at a rally in Lake Charles, La.

"Kevin McAleenan has done an outstanding job as Acting Secretary of Homeland Security".

In a statement, McAleenan thanked the president "for the opportunity to serve alongside the men and women of the Department of Homeland Security", adding that the department has "made tremendous progress mitigating the border security and humanitarian crisis we faced this year".

McAleenan took over for Kirstjen Nielsen in April 2019.

McAleenan had been frustrated with a cadre of Trump's appointments to senior immigration roles and recently told The Washington Post that he was struggling to control his department.

"The DHS secretary should be somebody who is completely part of the team, and while McAleenan is not some guerrilla fighter of the resistance, he's not really totally on board the Trump train", he said. In a letter to Congress obtained by ABC News expressing "enthusiastic support" for McAleenan's nomination to lead U.S. Customs and Border Protection, officials from both the George W. Bush and Barack Obama administrations called McAleenan "supremely qualified". "That's uncomfortable, as the accountable, senior figure".

Turkey says it will not stop offensive as U.S. threatens sanctions
Treasury Department on possible sanctions against Turkey in relation to its anti-terror operation in northern Syria. Mnuchin said the United States was not activating the sanctions at this time but would do so if necessary.