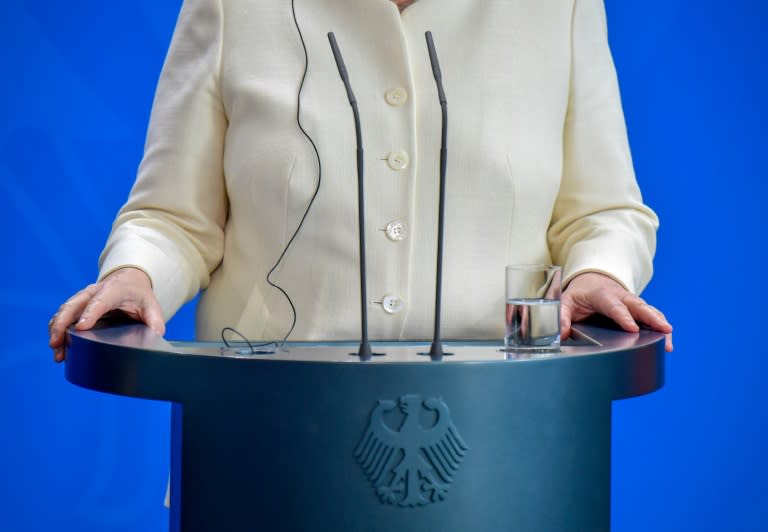 ANGELA Merkel has been pictured sitting down for an official ceremony in Berlin after her third bout of shaking sparked fears.

German Chancellor Angela Merkel on Thursday insisted she took care of her health after remaining seated during national anthems at an official ceremony, in a rare change of protocol apparently to prevent a repeat of uncontrollable shaking.

Merkel, 64, who suffered her third shaking episode in a month on Wednesday, seemed calm as she and the new Danish leader, Mette Frederiksen, sat down during military honors, the UK's Guardian reported. She had to restrain herself by clutching her arms together to keep herself still. "I said that I have to process this event and that I am in this process, and I think that just as it came, it will go away one day".

"Also as a person, I have a major interest in being healthy and I look after my health", said the chancellor who has her 65th birthday next week, quipping that every birthday made her aware that she was getting older.

The second incident happened at the German president's palace as she listened to his comments on the swearing-in of a new justice minister.

The first incident happened in near-identical circumstances as she stood alongside Ukrainian President Volodymyr Zelenskiy at a military honours ceremony.

She also said the trembling occurred due to a lack of water.

Merkel told reporters following the episode that she was "fine" and suggested that the psychological impact of the first incident was responsible for the subsequent episodes. "I am aware of the responsibility of my office", Merkel, asked about her health, told a news conference after meeting Frederiksen.

In November 2016, when announcing that she would seek a fourth term as chancellor, Merkel said: "It is a decision not just for an election campaign but about the next four years ... if health allows it".

Her office has given no explanation for the shaking episodes and Merkel has given no details of any medical advice or treatment she has been given.

Merkel, who has been leader of Europe's biggest economy for nearly 14 years, has always enjoyed relatively robust health.

Medical experts have played down speculation about the shaking, saying there are multiple potential causes of tremor.

Following the first two bouts of shaking in June, Merkel shuttled to Japan and back for the Group of 20 summit and attended overnight marathon negotiations in Brussels over European Union top jobs. It is not publicly known if Merkel has any health problems.

"I am very firmly convinced that I am entirely capable of performing", she added.

We’re playing for him: Angels honor Tyler Skaggs with amazing game
A picture of Skaggs was also included on the center-field wall and a video montage was provided on the scoreboard. Angels players had said before the game they were keeping Skaggs at the front of their minds while competing.

Antoine Griezmann's €800m Release Clause Is Larger Than Lionel Messi's
He rejected an offer from Barcelona previous year and revealed his thought process in a documentary called The Decision. The France global becomes Barca's third signing of the summer, following the arrivals of Frenkie de Jong and Neto .

Infiniti Impaled by Saguaro Cactus, Driver Walks Away Unharmed
A driver ended up in a prickly predicament - but largely unhurt - after a collision with a cactus on Wednesday morning, July 10. Jelineo said deputies detained the driver for further investigation after observing signs and symptoms of impairment.