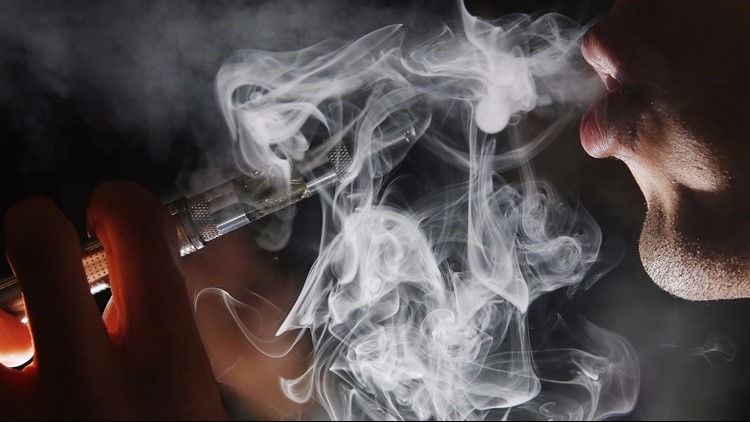 A Pennsylvania waitress who made a decision to try smoking e-cigarettes had only been vaping three weeks when she began feeling unwell, CNN reported. While her name was withheld to protect privacy, her medical history did include mild asthma, which usually does not require the use of medicine or inhalers. They work by heating liquid to a vapor that the user inhales and releases in an odorless cloud. The liquid is known as e-juice, and it contains flavorings, propylene glycol, glycerin and often nicotine - though many users are unaware of this final addictive ingredient.

The Pennsylvania waitress went to the emergency room at the University of Pittsburgh Medical Center after coming down with a range of scary symptoms, including coughing, difficulty breathing, and stabbing chest pains, which she felt every time she inhaled and exhaled, CNN reported.

ER doctors admitted the young woman to the pediatric intensive care unit after her coughing became more severe, and there she experienced respiratory failure. But her condition rapidly worsened.

"She was unable to get enough oxygen into her blood from her lungs and required a mechanical ventilator to breathe for her until her lungs recovered", one of the study's authors, Dr. Daniel Weiner, told CNN.

Her condition was so severe that tubes had to be inserted into her lungs via her chest to drain off the fluid that was accumulating.

She was diagnosed with hypersensitivity pneumonitis, also known as wet lung, which was triggered by chemicals in the e-cigarettes.

Wet lung is an acute respiratory distress syndrome, which can happen if an acute inflammatory injury leads to "leaky" blood vessels, says study author and the patient's pediatrician Dr. Casey Sommerfeld. She had last vaped one to two days before the onset of symptoms. "There are a few case reports involving adults that developed respiratory distress following electronic cigarette use, and I suspect we will see more if the use of electronic cigarettes continues to be popular". Five days after she first came to the hospital, she was able to breathe on her own, and was eventually discharged from hospital.

"It is hard to speculate on how frequently this could happen; however, there are a few case reports involving adults that developed respiratory distress following electronic cigarette use", Sommerfeld said.

The Pediatrics journal published a case report Thursday on the unnamed Pennsylvania teen who suffered respiratory failure and hypoxia and was forced to be intubated. "In this way, e-cigarettes can be the gateway to smoking traditional cigarettes".

Her research has shown that certain e-cigarette flavor chemicals significantly reduce the function of immune cells.

"Vaping nicotine through e-cigarettes, especially at higher concentrations, is associated with continued vaping and with smoking traditional cigarettes", Horovitz said. "It is important to note that electronic cigarettes still contain nicotine and can be addictive to children".

Vaping has become popular in the U.S. as a recreational activity and smoking cessation device.

"We also do not know whether potential health effects caused by using e-cigarettes are more pronounced" in teens.

Birnin Gwari: 10 feared killed as armed bandits attack Kaduna communities
The armed bandits attacked the villages around 5.00 p.m. on Tuesday, with the attacking lasting for about three and half hours. Aliyu, an Assistant Superintendent of Police, said seven were killed and five others in the attack.

Blues suffer Maurizio Sarri blow amid Antonio Conte uncertainty
The lack of results at Chelsea have sparked a tide of change as manager Antonio Conte will not be returning next season. Napoli boss Maurizio Sarri has held talks about a new contract with club president Aurelio De Laurentiis.

Aberdeen New Thai Investment Trust Plc (ANW.L) Moves 0.35%
Advancing issues outnumbered declining ones on the NYSE by a 2.30-to-1 ratio; on the Nasdaq , a 2.62-to-1 ratio favored advancers. Now the stock price is moving -30.27% off from the highest level of twelve months and +482.95% above from twelve months low.

Trump meets with North Atlantic Treaty Organisation secretary general
For instance, Estonia spent $498 million USA on defence, pushing it to 2.2 per cent of its GDP. Instead the criteria should be the spending of actual dollars on defence.

LeBron James and Tyronn Lue Did Not Want to Trade Kyrie Irving
Opponents have managed to outscore the Cavs by 82 points while Hood was on the floor despite him playing just 200 minutes. But somehow the trade has only managed to look worse and worse for the Cavaliers over the past couple of weeks.