MSU more focused on protecting itself than Nassar victims, repor 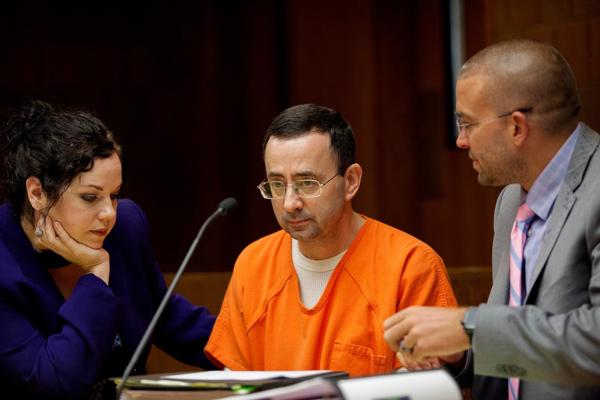 The House received thousands of pages of documents and communications pertaining to Nassar-related misconduct reported to MSU.

The results show that from 2014 until now, more than 240 victims reported abuse at the hands of Larry Nassar to the MSU Police Department.

Michigan has permanently revoked the medical license of disgraced former sports doctor Larry Nassar - a formality that would keep the former Michigan State University and USA Gymnastics doctor from practicing if he ever got out of prison.

"We feel compelled to note MSU appears to defiantly and wrongfully maintain it did not mishandle this investigation", a letter to the Speaker of the House summarizing the investigation states. The house report said the way that investigation was handled indicated a culture that was more focused on protecting the institution than survivors. "The university also tries to minimize the significance of different reports going to the complainant and Nassar by relying on such being consistent with the university's Title IX obligations".

Nassar's boss, former medical school dean William Strampel, told Nassar after the 2014 investigation that he needed to use gloves, gain consent and have a chaperone present whenever treating a patient in a sensitive area.

Committee members also found Nassar's "treatments" were not well-documented in medical records, saying "Nassar did not solicit or receive payments from patients or their insurers for numerous "treatments" and numerous records that were kept "lacked any reference to the sensitive nature of the "treatments" (e.g., intravaginal)".

Moreover, the experts' explanations were "fallacious at best" and only "provided circular justifications" for what Nassar claimed were legitimate medical treatments, the report states. "The investigative team will be reviewing the report".

"Our hearts go out to the survivors of Larry Nassar, and we are truly sorry for any way that the university failed to protect its student", Guerrant said.

"MSU will be working with the House on its legislation and shares the joint concern of lawmakers who want to make sure the horrendous abuse that Larry Nassar executed can not happen again".

Additionally, House members discovered 91 complaints have been filed with the university since Kalamazoo native Rachael Denhollander filed the 2016 Title IX complaint that ultimately led to the once-famed doctor spending the rest of his life in prison for sexually abusing athletes under the guise of providing treatment. They suggested that intravaginal treatments for minors only be used in rare, necessary situations.

Lawmakers came up with about three dozen recommendations, including requiring an outside investigation when there are multiple Title IX complaints against a university employee, and creating a third-party to ensure schools are following Title IX protocol.

The report marks the first time the state legislature has commented publicly on the Nassar case. The House of Representative is expected to vote on the bills passed by the senate in the near future.

Mom's Coming Out Brought Jay-Z to Tears
Jay-Z got an earful from his daughter - and it was the most attractive thing she'd ever said to him. And you think you're protecting your kids. "I wake up, look around, look at my kids, they healthy".